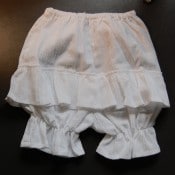 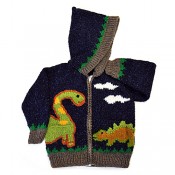 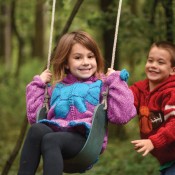 Breathable ruffled bloomers. Pair them with any of our girls dresses for a super cute set! Cotton. Made in Ecuador. 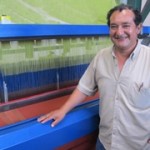 Isidoro was born on 4 April 1954, in a village from the Cuzco region.

In 1975, when he was 17 years old, Isidoro started working in a small knitting business where he didn’t actually knit, he was an assistant that swept the floors or put together the right colors of yarn for the workers. In the evenings that he spent alone cleaning up after everyone left, he became interested in trying to knit and his curiosity pushed him to experiment with the various machines. Soon, he was found out and the owner of the business told him that at night he could practice knitting in the garage on a very old loom. Therefore, during the two years that he worked as an assistant, he slowly learned the trade until he was promoted to knit with the rest of the workers. However, one day when he mistakenly used the wrong type of cotton in the loom, the owner became very mad and fired him right on the spot. Isidoro left with resignation but after 5 days the owner came looking for Isidoro, asking him to come back, because she realized that she needed someone as knowledgeable as him in the workshop. Because of his pride and the way he was treated, Isidoro decided to not return and instead went looking for other work.

He worked in a variety of jobs, including washing cars, until he found an opening in a tie-making workshop. He worked there for a few years and even became a part owner of the business. However, because of a variety of problems he had with the other co-owners, he left that business to start one of his own. So, at just 22 years old, he bought a small loom and started a workshop making ties. He traveled to markets and artisan shows to sell his product and did grow as a business, but he just couldn’t compete with the larger companies. So, he stopped making ties and decided instead to invest in learning how to make knitted scarves and blankets. That business change was very successful for him, until 1988-89 when the terrorist group in Peru, the Shining Path, made it hard for him to continue in the place where he had the workshop. So he moved it to another town on the other side of Lima and worked for 10 years increasing his business.

Finally, in 1998 he and his wife Agripina Veserra bought a large piece of land in Huachipa, where they currently have their business and machinery to make scarves. They work with 18 workers and 2 administrators and make a very large variety of knitted alpaca products. Isidoro in particular believes in investing in industrial machines and technology for the future and his workshop is filled with large machines up to the ceiling! Further, his company is widely known for being honest and responsible, and he says that he holds himself to high standards in being “honest, a hard worker, and satisfactory to customers.” 12 years after his first job as a teenager sweeping floors, he ran into the old boss that fired him so strictly. He was so grateful to see her, and all he could do was thank her for giving him the opportunity to learn. He says “the most useful thing is learning” and that while he was initially mad at her for being so strict, he later realized how she gave him the opportunity to learn the trade and has made him what he is today. Isidoro comments, “When everything is given to us, we don’t give it much value, but I do because I had to work for all that I have.” Now, he wants to pass on this knowledge to his children: “my satisfaction is not in giving money to my children, it is giving education.” Isidoro speaks fondly of having taken advantage of the chance to learn something and that has gotten him very far in life. He currently works with his wife and children in the business: his son Tony is 31 years old and is a Textile Engineer that works in the administration and costs of the company, his daughter Sheilla is 29 and an Industrial Engineer that handles international exports, and his daughter Ruthy is 19 and still in school studying architecture.

Talking also to his oldest son Tony, he remembers how knitting and the business was always such an integral part of his life. He remembers watching his parents hand-knit the majority of products and then see the transition to the industrial age where it was done with machinery. Now that he is in charge of the administration aspect of the business, he works to find a balance between the national and international market, as well as take what he has learned from his father to give other people chance to learn the business. He echoes his father’s thoughts in saying that “investing in the development and technology is a major thing that allows one to differentiate themselves.”

Be the first to review “Single Ruffle Bloomers” Cancel reply