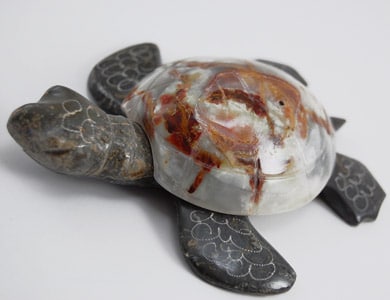 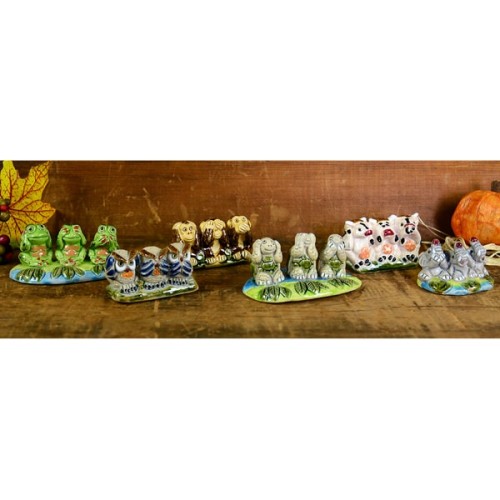 Turtles’ bodies are made of black marble from the jungle area around Riobamba and the shells are made from onyx of Cuenca. The fossilferous marble and onyx stones used are ancient and vary widely in color and pattern.This turtle is about 6.5 inches or 16-17 cm from head to toe. 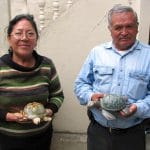 Carlos and his wife Blanca are grandparents of eight, born to their four children. Their grandson, Carlito an adorable six-year-old, often works with them in their shop on weekends. He is an accomplished salesman at only six! His mother is a doctor, his father, also Carlo, works in genetic engineering at the Catholic University of Cuenca.

Carlos, Sr. estimates he has been working with Minga for approximately six or seven years. He and his wife make animals and other decorative objects of marble and onyx: turtles ranging from 4 to 25 cm, an ashtray on the back of a turtle, penguins, elephants, a soap dish, an egg, the map of Ecuador with an inset brass stripe made of onyx, and a miniature of the monument at Mitad del Mundo. Carlos carves, and Blanca polishes them and adds the tiny decorations. Their house is small with an open courtyard between the home proper and a small room is used for packing, shipping, and storing the products. The stone carving has to happen in the open air because that reduces dust. He remarks that he gets cold working outside and it bothers his bones.

The one thing they each would like their customers to know is that stonework is very difficult and somewhat dangerous because of the stone chips and dust created during the carving and polishing stages. They have to wear masks to keep the dust out of their lungs. They would like customers to know that just because the material used in the smaller pieces is less does not mean the work for them is easier. Because the pieces are so tiny, it takes them more time to cut, polish, and assemble the three pieces of the turtle—the head and underbody of marble and the shell of onyx, for example. Sometimes they paint the shell in bright colors.

When their children were small, they were both professors at a high school teaching language arts. Even though they both worked, this profession did not pay enough to meet the needs of their young family. So Carlos apprenticed himself to some stone-carvers in order to learn the trade. This was about thirty years ago. He did not have to pay, but he was paid nothing while he learned. They set up a booth in a local crafts market in La Plaza de la Madre (one of 80 such booths) just off the main square in Cuenca, a city of 600,000. At present this market is closed for replacing the stone floor, therefore we were not able to visit it. He told us that he has other pieces on display there, including some large pieces. From Cuenca, many thousands of men emigrate to the U.S. each year in search of better wages.

Carlos and Blanca stayed, but they have struggled a lot to make ends meet over the years. Currently they are retired from teaching, and the work from the stone carving is not full-time. He says that the cold is getting to his bones now when he works outside. Their goal several years ago was to have a small house and a car to transport the stone. It seems he has met those goals and now has a new one: he would like to have enough orders from the wholesale trade to be able to close the booth in the city center and work exclusively carving and shipping his work to buyers around the world.

Once their children were grown, they were able to use their earnings to grow it a bit more (previously most of their earnings went to covering their living expenses). Carlos is very proud that his work has gone to so many far-away and to him, exotic, places. He seemed to think that they had gone as far as France via Otavalo and the U.S.

Be the first to review “Marble/Onyx Turtles 16cm”