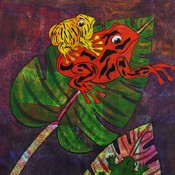 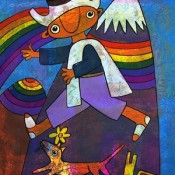 Original artwork. Acrylic on cotton fiber paper. Contact your local fair trade retailer to purchase this or other pieces of artwork. Retail Price: $70.00

Armando was born in Otavalo, Ecuador in 1964. From childhood he was interested in arts such as drawing and painting. As a teen, he went to an arts related high school called Daniel Reyes in Ibarra, a nearby town. His passion led him to join artistic youth groups and he participated in a great number of events around the province. Early recognition was achieved for his talents. Later on, he enrolled in the plastic arts and handcrafts career in the Universidad Tecnica del Norte, where he got his bachelor degree. Now he has a professional career presenting his work in galleries and national events.

His work has been shown in countries like the USA, Chile, New Zealand, Australia, Finland, and Letonia among others. Armando shares his art with humanity; he believes that through observation he can send a message full of forms and colors that reach the spirit that all men share.

His work is full of color, with simple forms and a direct message that can be interpreted clearly – there are no confusing elements. His work has been labeled as NAIF, which is the representation of the social experience within the boundaries of innocence and ingenuity, which is considered by many as the optimum way of life. Armando´s meditation or experiences in that simple life serve as the source for his inspiration. He believes that simple things like a hug, a tender look, children playing barefooted in a rainy afternoon, sharing our life with our “little brothers” the animals, the interaction of men with the forces of nature (such as volcanoes), becoming one, man and nature, etc. are the air that inflates the spiritual life that all of us should develop. The simple things can be seen as gigantic. When we pay closer attention to our surroundings these moments can transform our inner selves.

Be the first to review “Frogs on Leaves” Cancel reply